Though it is true that the Co-operative sector developed in different dimensions after 1951 due to the economic planning, the report containing valuable suggestions submitted by the Co-operative committees under the chairmanship of Samal Das in 1920 and Chandrashekar in 1935 emphasising the necessity of developing Co-operation in the state, cannot be forgotten. During the period, many Co-operatives were born in order to provide agricultural loan, and to undertake processing and marketing of agricultural produces in order to prevent the exploitation by traders and middlemen, in the absence of institutional financing and marketing facilities. Of such, the Malnad Areca Marketing Co-operative Society which has now reached the peak, is also one.

The Malnad Areca Marketing Co-operative Society Ltd, which is populary known as “MAMCOS”, while establishing it under the chairmanship of Mr S. Sheshadri, the then Deputy Commissioner of Shivamogga (on 08-11-1939), with the purpose of safeguarding the interest of Arecanut growers, there were only 659 members and 5121 bags of Arecanut were collected. The society started with a share capital of Rs. 16,031/- earned a net profit of Rs. 3867 in the year of inception and was able to declare dividend at the rate of 6.25%. Since then “MAMCOS” has come up a long way with a membership of about 19000 and a strong financial base. From inception till now the society is working under profit and declaring dividend every year. 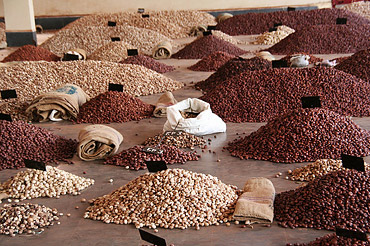 The main objectives of the society are to provide systematic marketing facility for selling the areca and other sub-crops grown by the members and agriculturists, to provide storage facilities and to sell the same at an agreed rate, to provide katav loan and giving advance on the produce brought in, to undertake processing activities etc.,

Area of operation extends to the revenue Districts of Shivamogga and Chickmaglur and revenue Taluks of Honnali and Channagiri of Davangere District.